A month or so ago, I got a Facebook message from a guy with a French-sounding name.  He said he was the Editor-in-Chief of the Official Xbox Magazine in France, and that he loved Hidden in Plain Sight, and wanted to know more about "the geniuses behind the game."

I told him that I was just an average guy with a wife and kid and cubicle job, and that making indie games was a hobby.  I thanked him for his kind words, and never got a response back.  No big deal.

Then, I got a message on this blog saying that my game was going to be on French TV!  There is a show called "Chez Marcus", where this dude reviews and plays video games.  The guy sent me the link to the show, as well as a translation. ***UPDATE***  I just got an email from Marcus.  They made this full episode free online, specifically so I could show it around to everyone.  I'm overwhelmed.

I wrote back to the Xbox Magazine editor guy on Facebook and asked him if he knew anything about it.  The guy responded back (apologizing for not getting back to me before).  He said that he'd talked to his friend Marcus (the tv guy), and told him about the game, and that Marcus decided to use it on his show!  He also said he was having a game night soon with friends from Ubisoft, THQ, and Sony and would make them play it.  (This has since happened, and the only comment I got was "They loved the game.")

I found someone on reddit who loaned me their username and password to the NoLife TV website (the channel which airs Chez Marcus), and was able to watch (and capture via FRAPS) the entire episode.  There were some good production value, and they guys were laughing the whole time, and really seemed to enjoy it.  I couldn't have asked for a better showcase for the game. 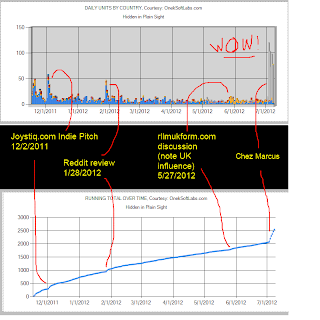 When the game first came out, I was talking with friends about marketing.  I remember Iwan made some comment about how word-of-mouth works, and how some people just kind of act as evangelists for a thing they like.  It appears this Facebook guy is acting that role, and I've seen others do it on message boards as well.  So that really seems like it's turning out to be true.

I've said this before, but on the one hand, I know this really sounds like I'm bragging.  I'm conscious of that, and it kind of makes me feel uncomfortable.  But on the other hand, I also don't really feel like I have that much ownership or stake in the game and it's success or failures, if that makes any sense.  It's something that I kind of threw together in a few weeks and set free, and how it lives or dies really is kind of out of my hands.  I feel much more like an observer to the whole process than directly involved.  It's all kind of surreal.